Written by Support
Updated over a week ago

BIN Management will allow you to block certain BIN numbers from your Campaign.

To add a BIN number to be blocked from the campaign, you will go to Payment Systems>BIN Management and click on the ‘Actions’ drop down menu and click ‘create’. You will then enter in the BIN range that you would like to block. The BIN usually consists of the first 6 of the customer’s credit card.

*Note*- The BIN must be added to the User Defined section first, and then you will add it to the profile.

This is where you will create a profile for the BINs you have added to the CRM. The BIN profile is what you will be adding to your corresponding campaign(s). You can have multiple BIN’s per profile, and multiple profiles per campaign.

When creating or editing a BIN profile, you have the option to select whether the BIN is prepaid or not. If you select 'Yes', all of the BINs within that profile will be considered pre-paid bins and will be blocked from the campaign. You also have the option to choose if you would like to block the BIN for initials, rebills, or both. For example, if you have a BIN that you want blocked for initials, but you would still like your rebills to go through with that BIN, you would select the Block Type as 'Block Initials" 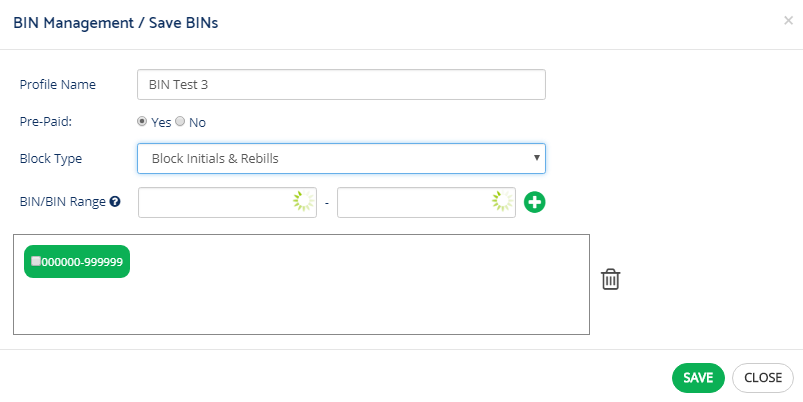 *Note*- If a customer tries to place an order with a credit card number that has a blocked BIN on the campaign, the order will be declined. In the order details it will show you that the order declined due to the BIN number being blocked.

Did this answer your question?